Adoption of Welfare Centre for Children With Speech and Hearing Impairment 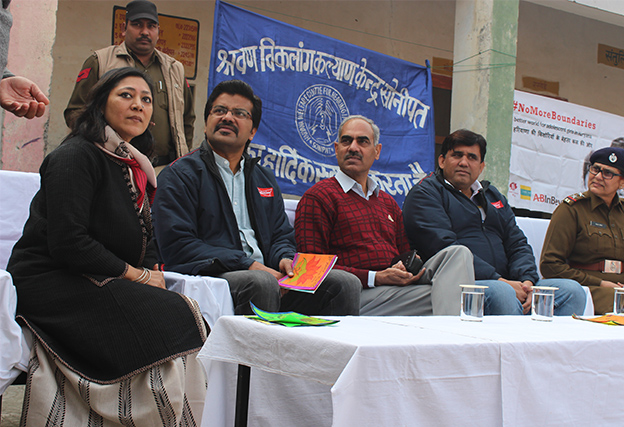 #NoMoreBoundaries program, an ongoing programme between PRIA and Martha Farrell Foundation supported by Ab In Bev (Haryana Breweries Ltd.) in Haryana, aims to create safe and conducive environment for young girls in Sonipat. Recently, with the recommendation of the District Administration, the programme has been extended to include Children with Disability at the Welfare centre for Speech and Hearing Impairment.

To mark the beginning of the collaboration, an adoption ceremony was organised with 40 Children from the welfare centre along with representatives from PRIA, Ab In Bev, Martha Farrell Foundation, Sonipat District Administration and Police Department. The District Commissioner of Sonepat, Mr. Vinay Singh was the Chief Guest at the event.  The children welcomed the District Commissioner with the self-made cards and Flowers. The learning was inaugurated by Mr. Singh which has been created for students with colourful and informative paintings and visuals. A separate changing room has also been created for girls to ensure their space and privacy. All the students were then presented with gifts such as Track suits, Sports shoes, a collective sports kit along with a menstrual waste disposal bin.

The Durga Shakti team working to provide safety to Women in Public Spaces interacted with the group. The female students were very inspired by the interaction with the women officials in the Sonepat  Police dept. and one of them said in the sign language saying, as she grows up she wants to join the police force. The officer further encouraged the Young Girls to pursue their dreams. The event came to an end with participatory games in which all the stakeholders took part with a lot of enthusiasm.