I want to spread awareness on women's empowerment 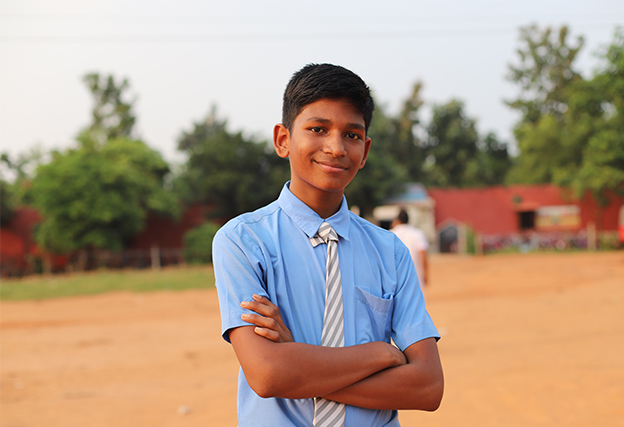 “I want to become an IAS officer when I grow up and spread awareness on women’s empowerment in India”- Harin Kumar Puhan.

The 14-year old, Harin resides in Bharatpur, a locality in Bhubaneswar, Odisha with his parents and sister. His father is a driver and sole bread-winner and his mother is a homemaker. His father’s hard work has inspired him a lot. He cycles every day from home to his school, Beena Bharati Vidya Mandir and back. A student of class 9th, he has a keen interest in the studies and wants to bring a social change by working with people.

Harin takes a lot of interest in going to school and consistently this has led to getting noticed by many in school for his ideas and positive attitude. In the past few months, the classes have become extra interesting with the intervention of Kadam Badhate Chalo (KBC) sessions. KBC is a youth-led initiative by Martha Farrell Foundation to bring boys and girls onto one platform. The platform which gives equal opportunity to express oneself is much needed in today’s scenario where boys and girls are subjected to rigid gender norms creating an unhealthy gender relationship. Through this initiative, KBC aims the youth to put an end to Violence Against Women and Girls (VAWG) by becoming the agents of change in their communities.

As a part of the curriculum, the students were educated about menstruation, the changes that occur in a female body, and facts and myths related to periods in women. “Menstruation is a natural process and girls should not be ashamed of it,” said Harin as he expressed his thoughts to the team of the Kadam Badhate Chalo program.

“It is necessary for us to understand the changes that happen in male and female bodies, and how to understandably deal with them while growing up,” said Harin. He substantiated by sharing “puberty usually starts between the ages of 8 and 13 in girls and between 9 and 15 in boys. Both go through changes in their bodies such as hair growth, change in the voice texture, menstruation in girls, and emotional and mental development. Teenagers like us need to understand the types of emotions they feel in various situations as it will contribute to better understanding and mutual growth of both sexes in a healthy way.”

He has shared the same with his peer group and he feels comfortable in sharing things in the class without hesitation. His learning on the changes that teenagers go through during puberty and how it affects their physical, mental and emotional growth and development was striking and new to him.
"Harin has developed to be more understanding and mature over the years", as observed by his teacher, Alok Kumar. “The sessions of KBC have helped in making children aware of so many changes that happen while growing up. This has created mutual respect among the boys and girls,” told Behera, sharing his feedback on the sessions conducted. Harin’s family has also been very supportive of Harin learning taking part in KBC sessions as they feel it’s a must for children and considered it helpful for students’ holistic growth and development.
As the session advanced, the students were intimated on sexual identities and orientation. Since adolescence is a tender age when a child develops his/her views, it is important for them to explore themselves. They should be familiarized with different sexual orientations and gender identities.
Often people do not realise the difference between gender and sex. With time people need to be made aware of concepts such as gender fluidity, sexual orientation and the rights associated with it. After the session, Harin came to the understanding that it is the right of a person to choose their sexual orientation and identify themselves with a particular gender.

In one of the sessions, Harin was thankful to the KBC team that he got to know something that no one talked about, about the community of transgenders. After the session, he expressed that, “they should be respected and treated well in society. No one can shed them of their human rights”.

The KBC sessions aim to use creative methods and techniques like art, theatre, music to take forward the discussions with the students and to make the sessions as interactive as possible.

Parents, peers, school, and environment plays a vital role in shaping children’s outlook. Their constant support and acknowledgement are important in changing rigid perspectives on menstruation, puberty, sexual orientations, and gender identities. It would not only help the students to understand their surroundings but also break stereotypes and conservative mindset of the people around them.