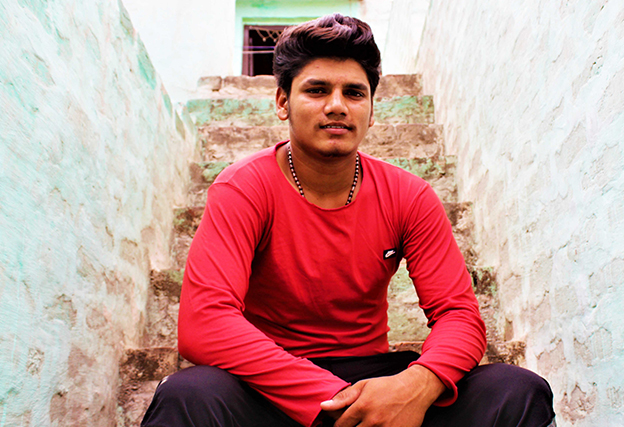 The Murthal region of Haryana is known for its parathas, however, 16 km away from the glitz and glamour of the ‘dhabas’ (food joints), lies the village of Rajpur, a close-knit community of 737 families. Today, the youth in the village are more motivated than ever to inspire change. This is largely due to the ‘No More Boundaries’ project, launched in 2018 by the Martha Farrell Foundation (MFF) in partnership with PRIA & AbinBev India to end Violence Against Women and Girls (VAWG) by collectivising youth to take action in their communities.

One such youth in Rajpur, 19- year old Rohit currently part of the No More Boundaries project, has come a long way from being a shy person to being known in the village for his leadership skills and the positive impact he along with his youth club brought to the community. Rohit started as a participant in MFF’s youth-led initiative Kadam Badathe Chalo program in 2013 and has since grown into a motivated individual, bringing change to the community through youth-driven discussions and actions in Rajpur, Sonipat.

The No More Boundaries project started off with its first task of profiling youth clubs, with youth volunteers registering their names from 10 villages across Sonipat, Haryana. The youth club members regularly met at the Anganwadi (public health care centre for a village in India). Soon after the members of the club along with Rohit went on door-to-door interactive sessions helping them to understand the issues prevalent in the village especially problems faced by the female members of the community.

The efforts of the youth started to show positive outcomes when a Participatory Safety Assessment (PSA), developed by Martha Farrell Foundation and PRIA was initiated in Rajpur to assess areas which were considered unsafe by villagers, especially girls. Following the findings of the PSA, subsequent discussions with the ‘Sarpanch’ (village head) and regular follow-ups with support from the community, led to the installation of streetlights and an alcohol shop being shifted outside the village. Also, to ensure easy access for girls to travel to their schools, a bus-stand was shifted into the village. Rohit, who was instrumental in leading the youth club, believes that the positive outcome of the PSA proved to be vital for the club as they had now gained the support of the community and were even able to convince several members to take action.

“It’s amazing to witness the youth taking collective action in the community (in Sonipat). Initially, the boys and girls were uncomfortable talking to each other and it had been a challenge to bring them together and also to break the barrier. The biggest achievement of the program is to see boys and girls having comfortable relationships with each other where they listen, understand and respect each others’ perspective“, says Yashvi Sharma, Senior Program Officer, Martha Farrell Foundation who leads the No More Boundaries youth initiative in Haryana.

On being asked if youth clubs faced any objections during the program, Rohit expressed “The villagers were initially apprehensive of the fact that the youth was getting involved in making decisions for their community, but once they got to see the impact of the initiatives taken by us, they wholeheartedly supported it. Moreover, there has been a behavioural shift in the mindset of the villagers and it has had a positive impact on women’s safety as they feel much safer travelling in and around the village”.

Sonia Khatri, the coordinator for the No More Boundaries project in Sonipat, has high hopes for Rohit and the youth clubs, “The youth clubs have been a game-changer as it has increased community awareness on various issues and has led to increased safety of girls and women in the village”.

Rohit’s leadership skills have not only inspired the villagers of Rajpur to take action but have also motivated other children in the community to create change through collective action. It is vital that communities recognise the ability of youth and more individuals like Rohit get a platform to express themselves and contribute towards the positive growth of the society.