Girls take the lead in forming their own group 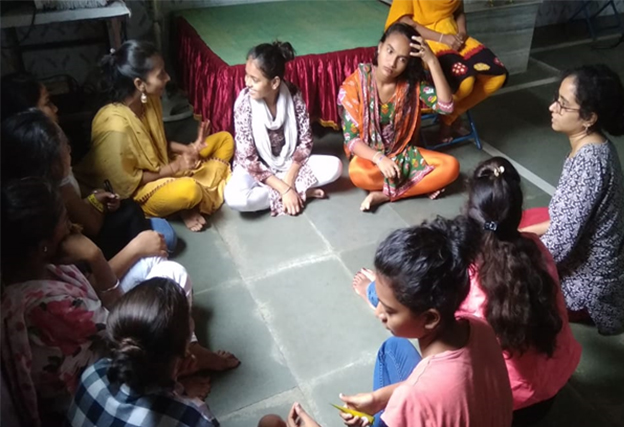 On 26th Aug, a simple energizer was used in identifying leadership qualities in adolescents. A game of ‘sab ke sath’ is the perfect example. The objective of the game is to display leadership and to learn to work together in a team. In order to bring twist, two members were taken aside and told to purposely to refuse to play for different reasons (The rest of group were not aware of this). This twist resulted in the game being played very well and through teamwork in the beginning, but as soon as one of the girls refused to play the team broke down. After the game, this was revealed to the group and discussed.

Teamwork and responsibility was discussed with young adolescents. Responsibility of not only the group to get members to continue with the group but also the message that goes to the rest of the group when some members don’t give priority to the group.

During the discussion about the Youth Meet, the group discussed what was needed to bring positive social change. Issues of the community were also discussed and ways in which they can work towards making it better.

Girls made plans for mobilization through creating space for girls in the community that need help in studies, who want to learn English and computers. They also are planning to see what small scale change they can bring in their community so to create encouragement for other girls to join.

“It is very easy to break groups, but very difficult to keep them together”

“When I say I’m not coming to class, then other girls also feel like they don’t have to go and then there is less attendance”

“(During the Youth Meet) I learned a lot of things i did not know before like about Kashmir. I think neither India nor Pakistan should have any say in what happens in Kashmir.”

“The Constitution is the only thing that unites the country”

Some of the girls took initiative in calling for their tuition classes makes a big difference. Even though it was Raksha Bandhan, the girls attended class giving priority to the group and its future. Looking at the energy of the group, responsibilities were divided for mobilization, as well as to create lists of girls interested in creating study groups to help each other out.