Orientation and Visualization Workshop with the Domestic Workers 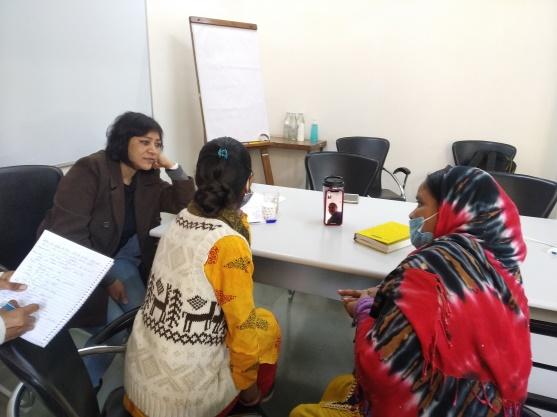 The project took the front seat with its first orientation workshop with the enumerators on 29th January, 2021. In the workshop, Enumerators were briefed about the project's objective and outcome. A brief introduction about the previous work done at Harijan Basti with Domestic workers was given so that a holistic understanding can be built around the issue.

Harijan Basti (project location) is a small urban slum located in between huge skyscrapers building of Gurugram; it has migrant population majorly from West Bengal, Bihar and Uttar Pradesh. Majority of the basti's population is informal migrant worker and women being particularly involved as a Domestic worker in the adjacent societies.

Domestic workers who were present in the orientation workshop expressed their sadness and constant fear of discrimination. They narrated about the harsh situations they faced during lockdown. "Joblessness has pushed them further deep in the vicious cycle of Poverty", said one of the domestic workers (who is also a enumerator for the project).

Further, it was discussed that a Resource and Support Centre will be set up in the Basti, which will be a safe space for the women where they will get important information about various entitlements, awareness about their Rights and it will serve as a platform where women can recognize their agency and their voices can be amplified.  In the initial period of the project, a need assessment survey will be conducted through which their aspirations and future planning will be outlined and eventually it will serve as a Framework for the Resource and Support Centre.

At the end of the workshop, domestic workers visualized the idea of Resource and Support centre through their lenses. According to them, it will serve as a space which will be accessible to all the women of the Basti. They also shared that Resource and Support Centre must be inclusive in nature and women migrant workers from all the states should be part of it.

Sarita, one of the domestic workers, visualized that "Resource and Support Centre will help women to be more aware about their rights so that in case of any kind of violence they must know what to do and where to go."

Another domestic worker, Bharati has a larger vision for life and she expressed that the centre should be a learning hub where she and many like her can learn and start their education again.

Baby Bano hopes that the center will help her to find a job where she will be treated with dignity and respect because in her previous job she was humiliated and discriminated by her employers.

During the workshop, they all visualized the Resource and Support Centre as an Association of informal migrant women workers which will help them in raising their voices and recognizing their agency.

Read about the project here.