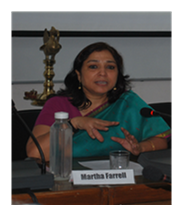 In the closet in my parent’s bedroom, there sit two metal trunks, medium sized, one older than the other, where my mother’s sarees await their fate.

After my mother died, my friend Martha counselled me to not rush in dealing with her things. She had assured me that she would help with the difficult decision of keepers and giveaways.

On the appointed day, in advance of her arrival, I emptied the trunks on to the double bed where my mother spent many hours.

My mother read hundreds of books: She read at night and when she could, during the day, always in bed. She listened to her favourite radio stations and programs on the transistor radio. With her back against the head rest, she took up hems of my father’s trousers, replaced buttons on his fly and shirt, mend tears in his dhoti, darned holes, put a patch in a salwar, knit sweaters. Sometimes she would spread a newspaper and sit cross -legged to shell peas, peel potatoes, or assemble ingredients for making ladoos.

I spread out the sarees, revealing their pulloos, borders, and recalled how she was very fastidious about putting falls on her silk sarees herself, no tailor would do. If the length of the sari was too much for her, she would either put it aside for my sister or remove the extra material and then re hem the edge.

Out here on the bed, there is summer, spring, winter, fall and seasons in between. Sarees for all seasons and occasions: tussar, chanderi, maheshwari, kanjivaram, organdi, organza, handloom, patola, voil, Dacca and such.  They are like Martha:  she embodies these varieties, I think to myself. She is a like a sari: beautiful, open, generous, expansive, flexible, adaptable. Her love for people and life is boundless. She can wear all kinds of sarees with great ease and grace.

Oh, look at this, and this. Martha exclaims as she unfurls one sari after another, wraps it around herself and then me to show their splendor and impact.  Wow, Aunty had such good taste, she exclaims. I love the mustard with crimson border.  And you need to keep the peach one with tiny flowers in embroidered with gold thread. I will get a salwar kammeez made out for you.  And save this magenta with a delicate embroidered border for Manisha. She should have some of these: her grandmother’s sarees.

Lucky for me, she laughs. I have whole new wardrobe for wearing to all the workshops I am doing from now till June.

And then she recited her destinations: Raipur, Chennai, Delhi and Kabul.

P.S Two months later, as she sat down to have dinner in the hotel’s restaurant after a week’s work with women’s groups in Kabul, she was shot and killed by a Taliban gunman. She was one of 13 killed that evening.

Today’s is the anniversary of her death. I miss you Martha