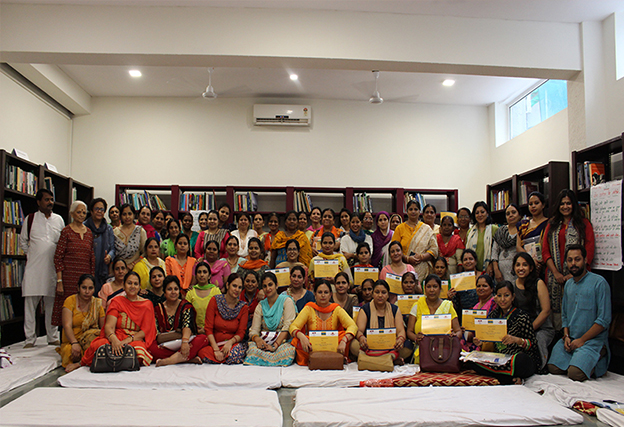 Martha Farrell Foundation, New Delhi: On 17th May, 2018, Martha Farrell Foundation (MFF) in collaboration with Society for Participatory Research in Asia (PRIA) and with District Administration of South-East Delhi conducted a day long capacity-building training for 60 women on prevention of sexual harassment of women workers in the informal sector. The 60 participants, nominated by the Local Committee (LC) of the South-East District of Delhi, included frontline health workers, Child Development Project Officers (CDPOs) and representatives from trade unions.

Sexual harassment of women at their workplaces is a reality all over India. While it is a known fact that women in the formal sectors face such harassment, the sexual harassment of women in the informal sector has been relegated to the backburner. According to ILO estimates, currently 94% of the total women workers in India are engaged in the informal sector. Majority of them come from extremely resource-poor backgrounds and 50% of them are sole bread-winners of their families. They are often illiterate and unaware about the law, making it extremely difficult for them to speak against this form of harassment. They also fear loss of livelihood and the stigma associated with the issue, which further deters them from reporting such violence.

Kavita, a participant and an ICDS Supervisor said, “sexual harassment is a routine occurrence in the areas that we work. You will hear of a construction site contractor who touches a woman worker inappropriately or a domestic worker who has been asked for sexual favours from her male employer. But since most of the women are so unaware and scared, they have no other option but to tolerate it.”

In India, the Sexual harassment of women at workplace (Prevention, Prohibition, and Redressal) Act 2013 or SHW Act, came into operation in 2013. It includes in its ambit both formal and informal workers. It mandates the constitution of an Internal Committee (IC) at the institutional level and a Local Committee (LC) at the district level for prevention, prohibition and redressal of sexual harassment. The constitution of LC and its effective functioning is of particular relevance for the informal sector.

It is now more than 5 years since the Act was passed and while the Act has been able to enforce compliance in the formal sector to some extent, mechanisms to address issues of Sexual Harassment at Workplace for the informal and unorganised sectors are grossly inadequate. The role of the LCs, as mandated by the law is to ensure redressal and prevention of sexual harassment at workplace for female workers of the informal and unorganized sectors, including home based workers.

During the course of its work, Martha Farrell Foundation has found that out of 712 districts in India, only 107 have constituted a LC. The members and the representatives of the LC are unaware about their roles and responsibilities and haven’t been provided with any forums or platforms to build their capacities. The situation in Delhi, India’s capital territory isn’t ideal either. Out of the 11 districts in the city, only three have constituted a LC.

Martha Farrell Foundation is committed to supporting state and district level Governments to strengthen LCs through capacity building trainings and third party support. Its partnership with the district administration of South-East Delhi has resulted into the formation and proper constitution of the LC in the district. To ensure 100% meaningful compliance of the law from bottom-top, frontline workers like Aanganwadi Workers, ICDS supervisors, CDPOs and union members are being trained and capacitated. Their preparedness as first points of contact is necessary for preventing and reporting sexual harassment in the informal sector and for generating awareness in the communities.

Stating the importance of prompt institutional action, Dr. Bharti Sharma said, “The LC of the South-East District of Delhi has committed itself to strengthening systems for the prevention of sexual harassment in the unorganized sector. This will also set an example for other districts that they also need to set such systems in place to ensure that women workers get justice”.

Emphasizing upon the need to work collectively on this issue, Nandita Pradhan Bhatt said, “MFF will continue to support and bring together women workers, government officials and unions to collectively put an end to this form of harassment. It is only through collective action that we can make the law accessible for women workers in the informal sector.”

This training emphasizes on the need for the government to strengthen the implementation of the SHW act and create awareness, so that women workers in the informal sector can work with dignity.