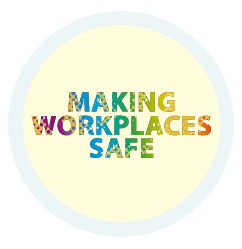 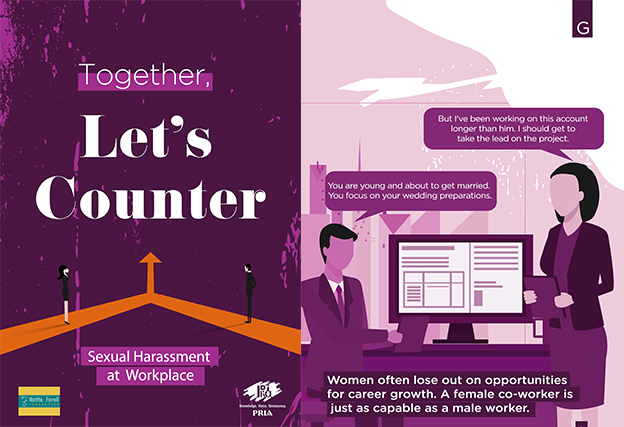 "One of the most pervasive ways of subjugation, intimidation and discrimination against women in the workplace is sexual harassment” – Dr. Martha Farrell

In spite of having the robust Sexual Harassment of Women at Workplace (Prevention, Prohibition and Redressal) Act passed by the Government of India in 2013, which addresses both formal and informal sector workers, the number of incidents of sexual harassment at the workplace has increased. Mechanisms for redressal and prevention for the same have remained rare and where they do exist, their capacity to act appropriately is low due to lack of understanding of sexual harassment and redressal procedures.

The Foundation’s Making Workplaces Safe programme envisages that every district, block and national level organisation meet the standards of a meaningful redressal system.

●Make Employees Aware: SHWW Act 2013 mandates all workplaces to sensitize and make aware their workers/employees about what amounts to sexual harassment as per the act, the procedure of filing complaints and how complaints will be redressed. We help workplaces to sensitize their employees to help build a workplace culture of equality and respect. To this end, we provide Online Training Course (OTC) and interactive training sessions for Employees, customised as per the organisations’ needs, and posters for Workplaces to inform employees about SHWW Act 2013

●Capacitate Internal Committees (IC): SHWW Act 2013 mandates all workplaces with more than 10 employees to constitute an Internal Complaints Committee (IC), which will be responsible for conducting a fair and a prompt inquiry in cases of sexual harassment at the workplace. We help workplaces to form their ICs as per the law and conduct interactive and intensive trainings with IC members about their roles and responsibilities. We also support organisations by framing a comprehensive anti-sexual harassment policy at the workplace, advising and guiding ICs on legal and practical aspects of dealing with the issue, providing informative guidebooks/manuals for IC members and employees, and becoming third party representation on the IC

●Train Third Party Facilitators: The Act mandates the presence of a third part facilitator/ external member on the IC, who is familiar with the issue of sexual harassment at the workplace and shall ensure an impartial inquiry of any matter related to SHWW. We train third party facilitators to gain comprehensive knowledge about the Act and practical skills to become a fair and an informed member of the IC.

●Training of Trainers (ToT): We offer certified courses and training programmes to interested practitioners, who can then join a pool of trainers.