A step towards creating a safe campus: Workshop at BPSMV, Sonepat 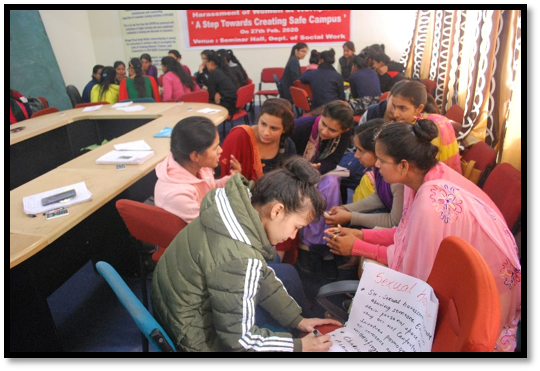 MFF conducted a 3-hour long session “A step towards creating a safe campus” at Bhagat Phool Singh Mahila Vishvidalaya (BPSMV), Khanpur, Sonepat, on understanding sexual harassment of women at the workplace. Established by the Government of Haryana in August 2006, BPSMV is the first state-run university in North India dedicated to women.

The session was organized for the students and faculty of the college. There were 35 students and 3 faculty members from different streams such as Social Work, Commerce, etc. The objectives of the workshop were:

With the help of participatory methods, individual responses, group discussion and personal response system, participants were encouraged to discuss attitudes and behaviour towards different genders. These exercises helped them realise that women do not invite sexual harassment with their provocative dress or behaviour. Instead, it is the internalised patriarchy that shifts the blame onto the woman. The myth that toxic masculinity or predatory behaviour is intrinsic to men was also debunked. Another misconception that was resolved was regarding harassment being aggressive and visible at all times. Participants later demystified the different forms of behaviour that come under sexual harassment – physical, verbal, non- verbal and visual.

As laid down in the Sexual Harassment at the Workplace Act, 2013, the boundary of ‘workplace’ has expanded. Therefore, it is important to understand workplace extends beyond the campus; the field and villages students go for their research work as well the transport they used to travel to and from campuses come under the purview of ‘workplace’. Participants were also sensitized about the presence of ICs in their campus and how they can file a written complaint before it, in case of sexual harassment. The facilitator also emphasized on the power of women’s collective and solidarity and why we need/how to stand for and with survivors.

Since change must start from within, students of Social Work realised that they must shed all gender bias and prejudice based on false stereotypes. They also learnt that sexual harassment can also be prevented through collective action and the onus of making campuses safe is jointly shared by students and teachers.