National Conference on Societal and Justice Response to Sexual Violence at Workplace: Measure for Policy Reform 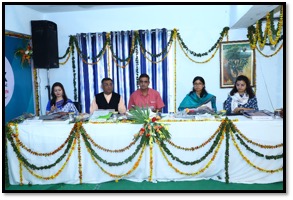 Martha Farrell Foundation participated in the plenary session of “National Conference on Societal and Justice Response to sexual violence at workplace: Measure for Policy Reform” organised by Vivek College, Bijnor, on March 13, 2020. The conference was primarily directed towards a multi-sectoral discussion of sexual harassment laws at the workplace and understanding the societal and justice outcomes for survivors of sexual harassment.

As, plenary speakers, speakers from MFF focused on two important issues, namely the limitations of the Prevention of Sexual Harassment at Workplace Act, 2013, and lastly, the roles, responsibilities, issues and challenges faced by the Internal Complaints Committee.

To develop an understanding towards the limits of the SHW Act, two of the Foundation’s major studies were used. The RTI report in 2017 reveals that out of 655 total districts in the country, only 191 districts have setup a Local Committee (LC). Second, the Action Research carried out by Domestic Workers in conjunction with MFF reflects that all of them were unaware about the redressal mechanism accorded to them under the SHW Act 2013. These studies clearly reflect some of the major gaps and challenges in the implementation of this Act, such as:

Moreover, the IC has three primary roles: Prevention, Prohibition and Redressal. For the first two to happen, ICs need to be more present and active. The Committee cannot be an Ad Hoc committee formed only when there is a complaint. The challengesthat ICs face range from pressure from management, the lack of knowledge and training regarding the inquiry procedure, to uncertainty of the manner in which they must deal with the complainant/survivor, as well as an absence of a proper understanding of the nuances of the law on sexual harassment at the workplace. There are numerous cases of ICs coercing the complainant to choose conciliation, and the pitfalls of the same were discussed by MFF panelists.

The final point of discussion pertained to why it is important for members of the IC to know their powers. Under the Code of Civil Procedure (CPC), ICs are bestowed with the same powers as a Civil Court, including the power of summoning and enforcing the attendance of any person, examining the individual on oath, and requiring the discovery and production of documents essential to the case.

Through an elaboration on these aspects of the law, the panel sought to build an understanding into why ICs fall prey to powerlessness, despite being accorded the powers of a Civil Court. This discussion is necessary to properly analyse the ineffective implementation of the law in the country.