Training of Nodal Departments of Sikkim Govt. on PSHW Act 2013 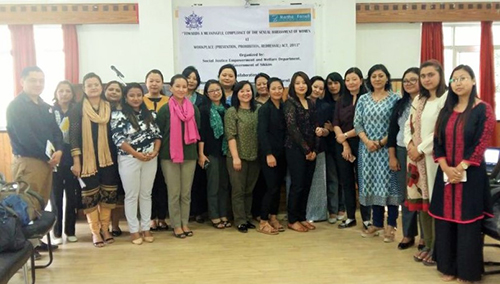 The Members of Internal Committees from 12 Nodal Departments of the Government of Sikkim participated in an intensive training on building an understanding on the Sexual Harassment of Women at Workplace (Prevention, Prohibition, Redressal), Act 2013, and their role in implementation of the law. Internal Committees are responsible under this law for the prevention and redressal of sexual harassment within their workplaces. The training was conducted on October 26, 2016 in the conference hall of the Social Justice, Empowerment and Welfare Department in Lumsay, Upper Tadong, Gangtok.

The training was conducted by Nandita Pradhan, Programme Manager of the Making Workplaces Safe program of the Martha Farrell Foundation. Deputy Secretary, Social Justice Empowerment and Welfare Department informed the participants about the actions that the department has been taking for meaningful compliance of the Act in the State as a Nodal Department. Further she also informed that Martha Farrell Foundation is a technical partner of the SJE&W Department to support in this endeavour.

During the training, Nandita shared that sexual harassment at workplace is one of the most under reported forms of violence against women. The internal committee therefore has a crucial role in creating awareness on the issue and making justice accessible to the aggrieved. It is crucial for its members to not only be aware of the law, but also be sensitive.