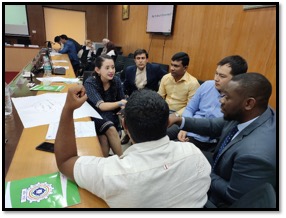 On February 25, 2020, MFF conducted a workshop titled ''Women’s Safety at Workplace” with 30 mid-level and senior officials from 20 countries, at V.V. Giri National Labour Institute (VVGNLI), an autonomous body under the Ministry of Labour and Employment, Government of India.

VVGNLI primarily conducts and produces research in the field of labour and training of labour administrators, trade unions, public sector managers and other government functionaries concerned with labour. It also undertakes seminars, workshops and lectures on specific issues periodically. Under the aegis of the ITEC scheme of the Ministry of External Affairs (GOI),VVGNLI organised International Training Programme on Health Security and Protection of Workers between February 10-28, 2020.

As women’s participation in the workforce participation increases exponentially, it is important to talk about women’s safety at the workplace beyond occupational health and hazards. Keeping in mind that women’s safety has many dimensions, the focus of the ‘Women’s Safety at Workplace’ workshop was on the prevention of sexual harassment at the workplace, beginning with that it constitutes and the various forms of harassment women face at work.

The workshop was modelled after participatory methodology and concluded with a group activity. Participants were asked the following questions:

They answered these questions in the context of their respective countries but it was evident that the definition of an “ideal workplace” was the same for everybody – it should be a conducive place to work where inclusivity must prevail. Concepts like consent, boundaries, appropriate and inappropriate behavior were discussed. Participants shared their accounts and experiences of various forms of sexual harassment prevalent in their countries, sectors, workplaces. They realised it is difficult to delineate sexual harassment, because certain speech and behavioral patterns have been normalised by society, at the cost of gender-equity or gender-fairness at the workplace. This is where it becomes the management’s responsibility to step in and enforce the rules to end sexual harassment at the workplace.

The conversation then shifted to the preventive and curative measures available for working women faced with workplace harassment. The international legislative framework by ILO, CEDAW & the UN convention for organizational safety was discussed. Participants hailing from various nations were also curious about the origins and the operational aspects of India’s Sexual Harassment at the Workplace Act, 2013. In this context, the struggle and contributions of GBV survivor Bhanwari Devi in advocating for Vishakha Guidelines was discussed.

The session came to an end with a de-briefing on sexual harassment, to drive home the point that it can be very subtle and implicit behavior, and that its impact (on the recipient of this behavior) is far more important than the intent of perpetrator.